Notice: Function add_theme_support( 'html5' ) was called incorrectly. You need to pass an array of types. Please see Debugging in WordPress for more information. (This message was added in version 3.6.1.) in /var/www/wp-includes/functions.php on line 5835
 Shrimp and Sausage Gumbo Recipe | CheapCooking ); 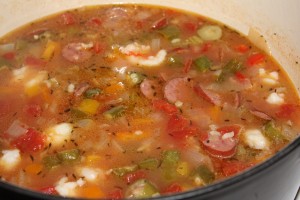 , a cookbook I liked so much I sent copies to my sister and best friend. I really like Pam Anderson’s books and have several. This one appealed to me because it deals with the “eating lunch at home” issue. I work from my home but I don’t really want to cook a lunch every day! She has some great ideas for lunches and salads that work great. This is one of the soups, which comes from a master recipe she has. One of the variations is this shrimp and sausage gumbo version, which was really good, both for dinner last night and lunch today. I have 1 or 2 more servings left as well.

This was really, really good!  It’s like a thick soup. I’ve never had gumbo anywhere so have no idea how “authentic” it is, but can say it’s good!  And was just as good for lunch today. I just microwaved a bowl for a few minutes to warm it up. Mmm!