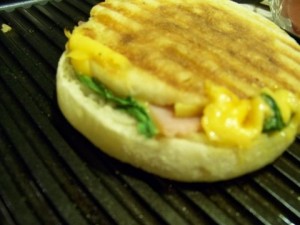 I made some macaroni and cheese tonight for dinner but felt like we needed a bit more as well, plus I was bringing dinner over to my broken-leg neighbor. I decided on a small panini and brought him some vegetable soup from last night as well.  I had some ham and cheddar cheese as the base for the Panini and added some apple slices, arugula and a dab of maple syrup as well. I made them on English muffins as I just wanted something small.

Each sandwich consisted of:

It came out quite nice! I really liked the crunch of the apple and the arugula kept it from being overly sweet somehow.