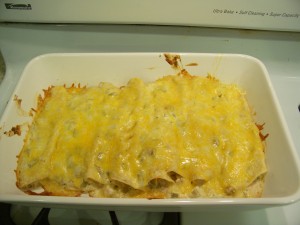 I’ve always loved chicken enchiladas with a green sauce at Mexican restaurants and was hoping this would be a good substitute! I found them lacking something, although my children enjoyed them. I think it was onions I was missing. But if I’d added them that might have meant the children did not like them, as they’re not big fans.  So if you’re looking for a mild chicken enchilada type recipe, you might like this.

If you tend to like blander foods, or your kids do, I think you’ll like it. I took the basis from The $5 Dinner Mom Cookbook: 200 Recipes for Quick, Delicious, and Nourishing Meals That Are Easy on the Budget and a Snap to Prepare

and it was good, just not quite as “sharp” somehow as what I was thinking. Or maybe it need some tomatillo sauce.

I served this with rice and beans so cut her recipe in half  to try to fill a 9×9 pan instead of a 9×13.  This made 6 enchiladas but the last two were a bit stuffed so you could easily make it 8 I think and add a bit more cheese. Oh, I also put some cheese inside each one rather than having it all on the top.

These are a very mild chicken enchilada.

In terms of timing, if you’re serving rice and beans, canned (or precooked) refried beans will take just a few minutes in the microwave so I would do those after the enchiladas come out of the oven.

, just start it when you first start dinner and the rice will be ready and waiting! I do love the rice cookers for that “keep warm” feature. In fact, today with a sick child at home, I made some rice at lunch because the doctor recommended plain white rice as her first solid food after the stomach flu. She ate some and I left the rest on the “keep warm” setting until dinner, 6 hours later. It was still perfect! If you cook rice on the stovetop, just allow about 30 minutes, so start it while the sauce is simmering.

Chicken was on sale here for 77 cents a pound, so I spent $4.70 for a chicken that made the broth and provided two or three times as much chicken as I used here in this recipe.   I’ll use up some of the rest in the next day or two and freeze the rest of the cooked chicken and broth (separately) for various dishes.  She calculated the cost for a double of this recipe as $4.75 total (to feed four people) but that included $1 for corn that I didn’t use, but would cover a can of refried beans easily enough. I’ve fed two of us and easily have another two servings so think that’s pretty accurate.  I haven’t ever calculated the average cost of rice per serving but will try to do that at some point.  For us, 1/3 cup of cooked rice per serving is adequate and that can’t add much.