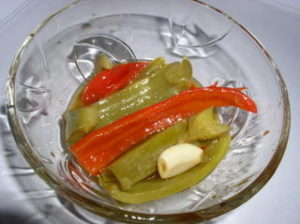 Sunday afternoons often find me with some free time and the desire to make a few things in the kitchen that cause the weekday dinners to go easier. School starts tomorrow for us. So I might normally think about baking a batch of muffins “egg McMom’s”, pancakes, or breakfast burritos for weekday breakfasts. In the summer, I might make a pasta or potato salad to serve up a few days in a row. In the winter, I often make a big pot of soup. In terms of a main course, I might roast a chicken and then have some “planned over” burritos (sounds much nicer than leftovers doesn’t it?). Or cook a roast and make hash or burritos or fried rice another night.

Today I made chermoulah. This is a recipe I found in Fine Preserving: Jams and Jellies, Pickles and Relishes, Conserves and Chutneys and Brandied Fruits for City and Country Cooks

. I had actually begun to collect cookbooks long before blogging. When I moved into this house, with its 14 fruit trees, I was struck by the idea of canning. My own mother had canned a variety of home-grown produce and fruits when I was growing up, everything from stewed tomatoes to applesauce and jams. I guess it just seemed natural that I try my hand. I found this book and bought it, long before I knew who MFK Fisher was, although in fact it was her annotations that made the book interesting to me. I’ve made a spiced cherry jam that is to die for, lemon marmalade, and chermoulah, peppers cooked in oil and vinegar, MFK Fisher’s favorite in the book as well as my own. When I saw green peppers on sale at the grocer, I remembered this recipe and made up a batch today. Like MFK Fisher, I like to make mine with a mixture of different colored peppers, although you could more easily just make it of a single color. The original recipe calls for green peppers only.

You cook up sliced peppers and whole garlic cloves in a mixture of olive oil, vinegar, paprika, coriander, salt, and pepper, then refrigerate. Serve it as a side dish, an appetizer, or whatever. If you’ve got some crusty French bread, the oil and vinegar mixture is to be sopped up with the bread. I could easily make a meal of the chermoulah and bread.

Today I did one batch of green peppers and one of red peppers, then combined them afterwards. It is a beautiful concoction, in addition to tasting heavenly!