In the quest for using up food leftover from the holidays, I’m targeting a large container of mushrooms I bought. I made a small portion of chicken tetrazzini for dinner, trying not to create more than one portion of leftovers! I had some cooked chicken leftover from making this fantastic “cure-all chicken soup” with spicy chicken broth, bean sprouts and rice. (Note that I didn’t have the kombu it calls for and the soup was still really good. Simmering the broth with ginger, onion, garlic, cloves, star anise and cinnamon made it delicious!)

So I had some leftover cooked chicken and a lot of mushrooms and I felt like pasta so chicken tetrazzini it was! Apparently this dish was named after an opera singer, Luisa Tetrazzini. I’ve made this with leftover turkey many times.

My measurements could be a little off so follow your instincts (and let me know in the comments!). I was definitely winging it. But the gist of it is easy:

When I made it last night, I quickly blanched some spinach in the hot water before I cooked the linguini. I squeezed it dry, chopped it, and stirred it into the white sauce. Other times, I’ve added cooked broccoli. 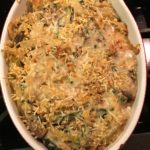 This is a delicious way to use up leftover cooked chicken or turkey. You could also add other cooked vegetables. Peas or broccoli would be nice.
Prep Time20 mins
Cook Time30 mins
Total Time50 mins
Servings: 2