I had some Brussels sprouts left over from the holidays that needed using up but I felt like doing something other than just roasting them. I thumbed through a few cookbooks and saw a recipe in Melissa Clark’s Dinner, a fun cookbook for playing around on weeknights, that caught my eye. Penne & Brussels Sprouts with Bacon and Pecorino.

Trim Brussels sprouts then slice them thinly. Dice bacon and cook with rosemary, then add garlic, black pepper and red pepper flakes. Add the sprouts along with a pinch of salt and a splash of water and steam-saute. Stir in a bit of butter, then add cooked pasta. She has you serve like that, with a bit of olive oil and lemon juice and a little cheese on top.

I cooked bread crumbs and garlic and oregano in a bit of oil until browned, then mixed with grated Parmesan, sprinkled the crumbs all over the top and popped the cast iron skillet under the broiler for a few minutes.

I used more Brussels sprouts than Clark called for because I know I like a higher vegetable to pasta ratio than most recipes call for. But next time, and there will be a next time, I’d add even more, probably twice as much by weight as the pasta. 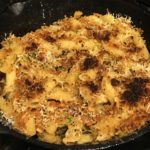