Notice: Function add_theme_support( 'html5' ) was called incorrectly. You need to pass an array of types. Please see Debugging in WordPress for more information. (This message was added in version 3.6.1.) in /var/www/wp-includes/functions.php on line 5831
 Corned Beef and Reuben Sandwiches | CheapCooking ); 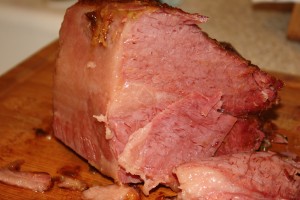 I got the yen for Reuben sandwiches while at the grocery store so picked up a corned beef. Initially I thought to cook it some new way –and I did!– but I started with just simmering it in water on the stove for 2 hours with the spice packet it came with after reading a bunch of recipes that basically sounded the same as the spice packet.  I think in the past I’ve mostly done it in the crockpot because I don’t remember spooning off so much foam before.  I looked at a bunch of recipes, both in cookbooks and on Chowhound. There were debates about oven versus stove versus crockpot but a few people mentioned finishing in the oven, whether you started on the stove or in the crockpot. One post that caught my eye mentioned mustard, another currant jelly and I think a third that mentioned both. I didn’t have currant jelly but I did have an open bottle of raspberry chipotle sauce I had bought at Costco and some hot and sweet mustard from some party or other. So after the corned beef was cooked, I heated the oven to 350 and mixed up equal portions of mustard and raspberry chipotle sauce and smeared it all over the corned beef, then put it on a foil-lined pan and popped it in the oven for 30 minutes.

Man oh man!  The best corned beef I’ve ever made!  The glaze added a great flavor and I think the texture was improved by just barely crisping the edges in the oven. 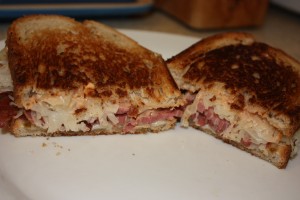 My initial thought was to have corned beef, potatoes, cabbage and carrots the first night and make the Reuben sandwiches for lunch or dinner the next day but I went straight for the sandwiches.  They were excellent–in fact I think I’m having another tonight! It balances things out if I have a small bowl of lentil soup for lunch and then feast on a Reuben sandwich for dinner right? (That’s not the lentil soup I made the other night but I was less than impressed with the new recipe so won’t bother sharing.)