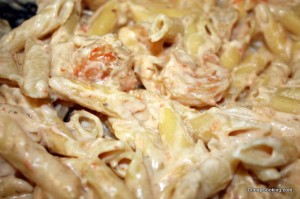 I had a few leftover frozen shrimp to use up and decided on pasta with some sort of creamy sauce, like an Alfredo.  I usually make an Alfredo sauce using cream cheese  but didn’t have any so searched through some cookbooks for something else that sounded good. I stumbled upon from America’s Most Wanted Recipes: Delicious Recipes from Your Family’s Favorite Restaurants

, (affiliate link) a book that was sent to me several years ago to review. I’m not a huge fan of trying to recreate restaurant meals at home but the recipes I’ve tried from this book have been quite good so I thought I’d try this one, modeled after Ruby Tuesday’s Shrimp Pasta Parmesan.

I halved the recipe which made enough for two of us plus some leftovers, although we ate all the shrimp because I didn’t have that many in it. I forgot to add the nutmeg and it quite good without but most Alfredo recipes have just a hint of nutmeg I think. I also didn’t have a fresh tomato so used some of last year’s Roma tomatoes that I had frozen. Freezing whole tomatoes works great, by the way. As the tomatoes thaw, the skins slip right off.  You wouldn’t want to eat them raw after freezing but they work great to throw into soups and sauces likes this. I mean to throw some frozen peas in as well but forgot.  Next time I think I’ll double the amount of tomatoes.