Notice: Function add_theme_support( 'html5' ) was called incorrectly. You need to pass an array of types. Please see Debugging in WordPress for more information. (This message was added in version 3.6.1.) in /var/www/wp-includes/functions.php on line 5831
 French Toast | CheapCooking ); 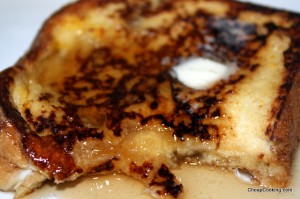 You can vary the milk : egg ratio for French toast depending on your tastes.  You want a somewhat sturdy bread for this, either day old French or Italian bread or what they sell as “Texas Toast” where I live, thicker sliced sturdy white bread.  You can also use raisin bread if you’d like (and then I’d probably leave the cinnamon out).  Just to say it’s flexible and you can adapt if you don’t have enough eggs or don’t like your French toast to be too eggy. And if at the end you are running out of milk and egg mix to dip the bread into, just add a bit more milk or another egg.

Leftovers keep well in the refrigerator for a few days or you can flash freeze them. Reheat them in the toaster or in a skillet or microwave.  I usually make a few more slices than I think we will eat as the girls like them left over.