It was hot here yesterday. I wandered the garden to see what I could use for dinner, along with the chicken I was marinating in some Greek herbs, olive oil and lemon juice.  Picked a crookneck squash, some tomatoes, a cucumber and some basil.   I am making freezer pickles with the cucumber (plus an onion and a green pepper from the garden) and the rest went with dinner.

The chicken went on the grill first, two leg quarters I’d marinated for just an hour or so in a FoodSaver marinade thing.  I’ve learned the hard way to cook the chicken over indirect heat. I preheated the grill with all 3 burners on, then turned the back one off and the front two down to keep the grill at about 400. Put the chicken quarters towards the back where the burner was turned off.   Laid a gill pan on one side to heat up for the veggies. 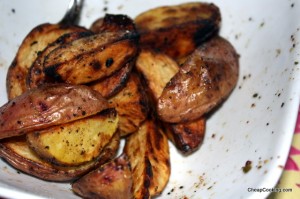 I had some small potatoes from the farmer’s market to use up as well, so quartered them, tossed with olive oil, salt and pepper.  These took about 15 minutes and I turned them several times to get the outsides a bit crispy. 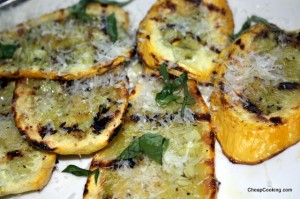 Pretty much did the same thing with the crookneck squash after slicing it.

I sprinkled a bit of Parmesan cheese on the slices after I took them from the grill, as well as some basil. 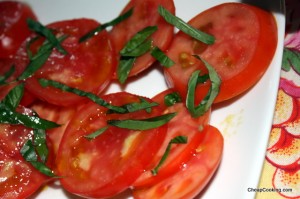 I fixed the tomatoes in our standard summer salad: olive oil, salt, basil.  Doesn’t get much simpler, or better, than that as long as you have good tomatoes.