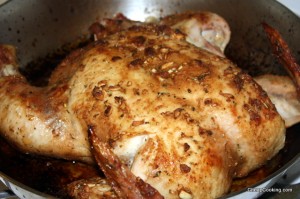 If you haven’t ever butterflied a chicken, you need to learn!  It will elevate roast chicken from a weekend meal (with lots of time to cook) to a weeknight meal.  By cutting out the backbone and flattening the chicken, it cooks much faster. Jacques Pepin adds cutting into the joints of the legs and the shoulders to reduce cooking time even further.  He says 30 minutes but I had a free range bird that took an extra few minutes.

Save the neck and backbone to make chicken stock of course!

I wish I’d had a photographer with me to take pictures but as it’s just me, you’ll have to do with these pictures on EatingWell.  Or here’s the video of Jacques himself preparing the chicken. Essentially cut out the backbone and then flatten the chicken so it’s about the same thickness all over. Just press down really good with your hands or pound it with a mallet if you’d rather.  Then Jacques Pepin has you cut halfway through the joints connecting the thigh and drumstick and halfway through the joints of the shoulder (under the wings).

Lots of recipes have you weigh the chicken down while cooking, with bricks or another heavy pan.  And I’ve done that. But you don’t have to.  You can grill this, broil it or roast it.  Whichever method you choose, it will take about half the time it would to cook a whole (intact) chicken.  The other night I followed Jacques Pepin’s recipe in Jacques Pepin More Fast Food My Way

For the Mustard Crust

Previous Post: « Raw Kale Salad from Dr. Weil
Next Post: Bread Crumbs: How to Make Your Own »