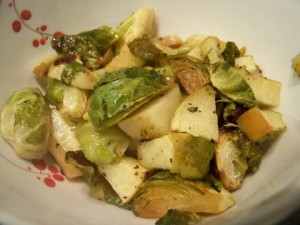 Okay, most of you are wrinkling your noses already aren’t you?  But for some reason I like Brussels Sprouts. I grew them one year in the garden as well and they were totally carefree and easy. Hmmm… probably about time to plant them again.

I found this recipe in the latest Cooking Light magazine. I’ve recently resubscribed and am enjoying it.  The combo of the apples and apple juice (I didn’t have cider like the recipe called for..is there really a difference?) and the roasting made this quite good. Even my 15 year old liked it!  I didn’t actually measure the sprouts, just used what I thought we would eat.

I used half a small jelly roll pan and filled the other half with some cut up red potatoes and roasted them at the same time. 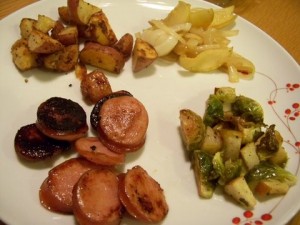 The sprouts were done slightly before the potatoes so I just pulled them out sooner, put them in a small bowl, and left it sitting on the oven to keep warm while everything else finished up.

This went great with the roasted red potatoes (cut into cubes and tossed with olive oil and Penzey’s Salad Seasonings), sliced and browned Kielbasa sausage, and some fried apples and onions.