Notice: Function add_theme_support( 'html5' ) was called incorrectly. You need to pass an array of types. Please see Debugging in WordPress for more information. (This message was added in version 3.6.1.) in /var/www/wp-includes/functions.php on line 5835
 Cooking Ahead: Roasting Vegetables | CheapCooking );

Home » Learn About ... » Make Ahead » Cooking Ahead: Roasting Vegetables 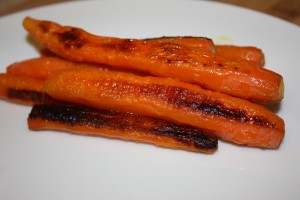 Last night it was just me for dinner and before I started I was re-reading parts of An Everlasting Meal: Cooking with Economy and Grace by Tamar Adler, which is not full of recipes exactly but more like ideas. It’s about not wasting food and cooking ahead and exploring. Every time I pick it up, I get ideas. And it’s beautiful to read. The hard part is that there are so many ideas packed in!  But I remembered the first time I read this. I followed her idea of cooking a bunch of vegetables at once and then using them over the next few days.  Since no one but me was waiting on dinner last night, I thought I’d cook the beets and carrots I’d bought at the farmer’s market while I figured out what to have for dinner.  Then I thew in a couple of sweet potatoes, too.

The carrots were just peeled, tossed with a little olive oil and salted.  I cooked them at 400 F but I’m not sure how long as I was just checking things periodically, maybe half an hour. These tasted so good I had to nibble on a couple.

The beets and sweet potatoes took longer, about an hour. She suggests cutting the tops off the beets, scrubbing lightly and then placing on a pan with a lip, adding some water to the pan, then covering with foil. (I lined the bottom with foil as well.)  This lets the beets steam and bake at the same time.  I’ll probably make Harvard Beets with them. 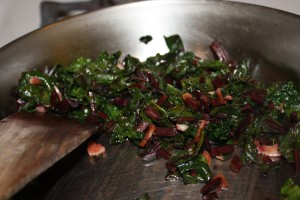 Once everything was roasting, I chopped up the beet greens and added the last few leaves of kale I had left from an earlier salad and steam-sauteed them.  Basically, wash the greens but don’t worry about drying them.  Chop them up. Heat some oil in a skillet and add the still-damp greens. Cook, stirring periodically, until done.  I added some sliced garlic as well. These were simple but delicious.

While I had the oven warm I decided to cut up the last of some stale bread and make croutons.  Then I started thinking about dinner, which was almost a sweet potato, beet greens and beets because it all looked yummy.  But I had some black beans from a few days ago and some chicken broth and thought to make soup but then opted for a dish she talked about in the section on cooking greens. 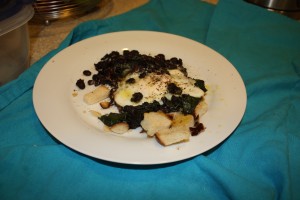 I heated up the black beans in a small skillet along with some of the beet greens. Then I cracked an egg open on it, salted it lightly and covered the pan until the egg was cooked through. I overcooked it a bit so the yolk wasn’t runny but it was still good. She suggested serving this on bread but I had just cut up all my bread to make croutons. No matter. I threw some croutons onto the plate and slid the black beans, beet greens and egg on top. Not the prettiest dish but it tasted great, and that’s all that mattered last night.