Notice: Function add_theme_support( 'html5' ) was called incorrectly. You need to pass an array of types. Please see Debugging in WordPress for more information. (This message was added in version 3.6.1.) in /var/www/wp-includes/functions.php on line 5835
 Stuffed Baked Potato with Bacon and Egg | CheapCooking );

Home » Cooking for One » Stuffed Baked Potato with Bacon and Egg 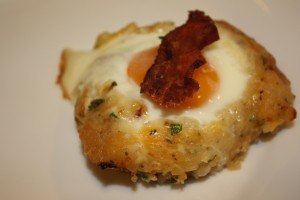 Stuffed Potato with Egg and Bacon

by Diana Henry. In my twice-baked potato world, I bake the potatoes, scrape the cooked potato out, mash up the baked potato insides with butter, milk and cheese, then stuff the potato skins back up and maybe top with a little more cheese.  In Henry’s stuffed potato world, she cooks chopped bacon and onions in a skillet, then scrapes the potato insides into the pan and mashes it up with the bacon and onion, stirs in Cheddar cheese, stuffs the potato, makes an indentation and adds an egg, then bakes it for 15 minutes.

This is a fun book and one of those that has a lead recipe and then an “Also Try” section, where she lists other variations. Her master recipe has blue cheese and an egg added to the potato. Other variations include smoked haddock and Cheddar. A sweet potato variation has goat cheese and olive-hazelnut salsa.

I sped up the baking part by microwaving the potato about 5 minutes after piercing it with a knife a few times.  Then I rubbed a little oil on it and some kosher salt and finished baking at 400F until done.

This was a satisfying dinner. I wasn’t sure if my daughter would be hungry when she got home so I made extras without the egg. They will be delicious chopped and browned for breakfast hashbrowns.