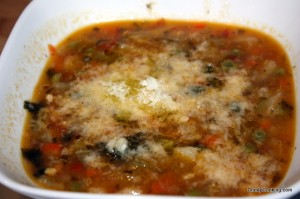 This is another recipe from Lidia Cooks from the Heart of Italy: A Feast of 175 Regional Recipes

Except I followed this recipe much less. For one, I used turkey broth rather than water because  I had this delicious turkey broth to use up. But I also was NOT going to the store, so substituted several suggested vegetables for what I had on hand.  All in the spirit though.  Key takeways are to cook the garlic, basil, parsley in olive oil first. Then add the celery, carrots, tomatoes and potato and cook more before adding the broth.  Then cook the broth down…and add olive oil and cheese. Mmmm.  Tomatoes were some of the final Roma tomatoes from my garden. We haven’t had a freeze here yet. Parsley and basil from the garden as well.

The original recipe called for chicory but I used green cabbage instead, because that’s what was in the veggie drawer needing to be used up.  I used the last of the spinach from Thanksgiving and frozen peas rather than fresh.  I also mostly halved the recipe and used less cabbage than chicory called for but used a bit more broth so her version would likely have been thicker.

The other great recipes I’ve tried from this book include pork chops with fried onions and  provolone cheese on top, potatoes with pecorino pepper, and a ground pork meat sauce.  The meat sauce was a bit bland for my taste somehow, surprisingly, even though I ground the pork myself!  But I am definitely liking this cookbook AND the show.

Note: I bought this book. It was NOT a review copy sent to me. Although publisher please note: I would LOVE to review any other books of hers.  🙂