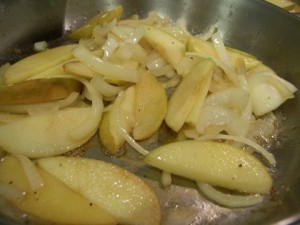 I used to have some celebrity cookbook that I can’t quite recall. It was by a southerner, a movie star maybe, female I think. The recipes were mostly stuff I would not eat but was fun to read about: fried this and that, lots of salt pork and butter and bacon grease–great tasting stuff I’m sure! I do remember making something at one point that called for a cube of butter in it. Man it was good–but I just don’t eat like that very often. At some point I got rid of the cookbook but I wish I’d kept it. Ah well. Today when I started thinking about frying up some apples to go with the pork loin I thought of this cookbook and thought of the fried apples and onions.

I often saute sliced apples with a bit of butter when we have pork. When they’re good and soft I sprinkle with some brown sugar and serve them up. They’re a kid favorite around here whenever we have pork or sausage.

I Google’d fried apples and onions and found a variety of recipes of course. I didn’t have any bacon in the house and didn’t feel like thawing out the bit of salt pork I have left in the freezer from when I made pinto beans the other night. So I just started with my usual fried apple recipe and added sliced onions. I still added the brown sugar after everything was cooked.

Man these were good! As predicted, the kids complained about “ruining” the apples with the onions but I’d put some plain applesauce on the table so they were happy. I liked the different textures and flavors. The onions are sweet but not as sweet as the apples and I liked the combination better than just plain apples.