We celebrated my boyfriend’s mother’s birthday Sunday afternoon with everyone bringing a dish to share and the hosts cooking a fabulous piece of salmon and some steak. I debated about what to bring and decided to bring something that I could mostly make ahead that didn’t require any heat (it’s been in the 90’s here regularly and it’s always hard to walk into someone else’s meal planning and need the oven or stove). This grated carrot salad fit the bill and was well received. Too often, carrots get the short shrift, just something to chop and add to a green salad. When the girls were younger, I would often make cooked carrots, which were always happily eaten, or I would just peel and slice them for snacking. Here they are the star of the show.

From my childhood I remembered grated carrot salad with raisins and a mayonnaise based dressing. I don’t remember particularly liking it or disliking it as a kid but neither did I want to make that version. I remembered this grated carrot salad with cilantro and mandarin oranges, which I routinely made for a while after spotting it in a Jamie Oliver cookbook but I know not everyone loves cilantro like I do and I didn’t have any mandarin oranges anyway. But the lighter dressing of just olive oil and lemon juice was appealing. (And once you’ve made that one, you pretty much never need to read the recipe again because it’s so simple.)

I thumbed through Dorie Greenspan’s Around My French Table and spotted her recipe for Cafe-Style Carrot Salad. Then I saw Giada’s Italian Carrot Salad from Giada’s Italy, with limoncello-soaked dried cranberries and parsley. I still have some limoncello from the last batch I made and I think I’ll try that next time, although I’ll probably skip the goat cheese she adds because I’m not a fan.

Dorie’s dressing is more complicated but I was intrigued by it, with a blend of Dijon mustard and honey, plus cider vinegar and canola oil. So I went with that one but I used a mix of raisins and dried cranberries and also added her optional chopped walnuts. 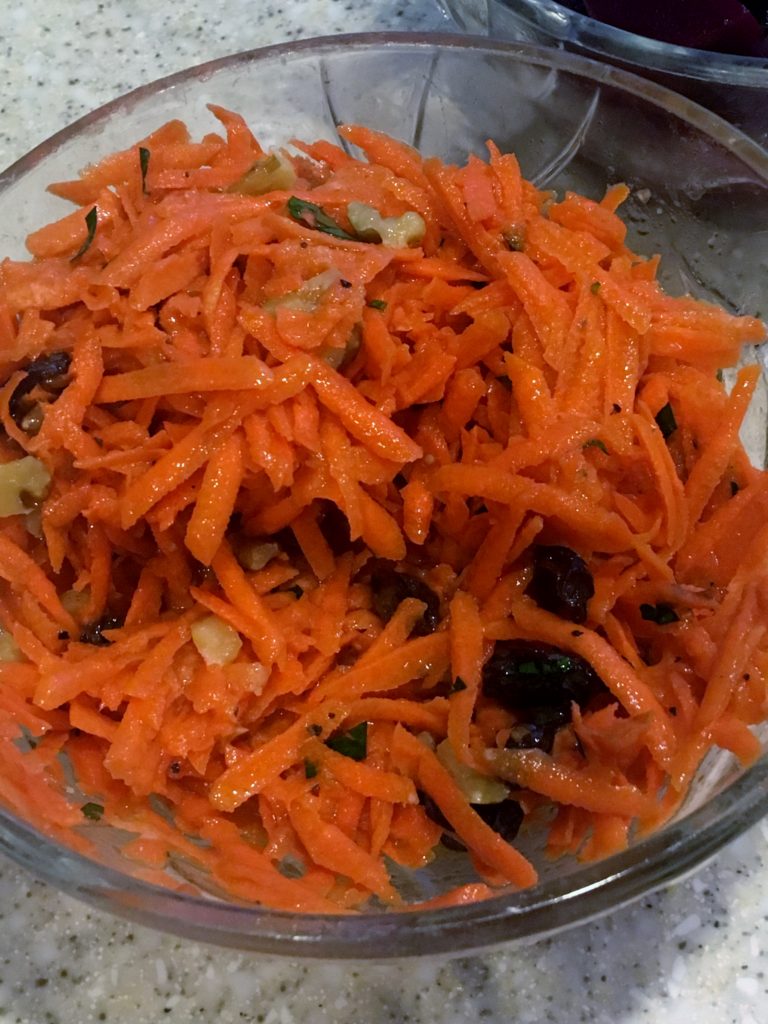 I’ve made this twice now. I made a half batch and grated the carrots by hand with a box grater and shook the dressing up in an old mustard jar.  The second time I made it I doubled the recipe and used the food processor. I like the leftover the next day so you could easily add the dressing ahead of time, making it easier to bring to a potluck.