Notice: Function add_theme_support( 'html5' ) was called incorrectly. You need to pass an array of types. Please see Debugging in WordPress for more information. (This message was added in version 3.6.1.) in /var/www/wp-includes/functions.php on line 5835
 How to Flash Freeze to Save Money and Eliminate Food Waste );

Home » Learn About ... » Freezer Cooking » How to Flash Freeze

Has this happened to you? You get a good deal on something and quickly throw the excess in the freezer–and then you’re stuck with a huge block of frozen whatever.  Learn how to flash freeze items so you can pull out just what you need. And always take a few extra minutes to package things well and label them clearly with what it is and the date! 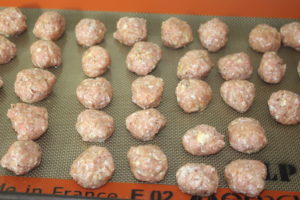 Flash freeze meatballs or other individual items like small meat loaves on cookie sheets. When they’re frozen, you can put them in a bag and then just pull out as many as you want.  You can freeze blueberries, sliced or chopped raw onions or peppers, etc. and then put them into a freezer bag. Because you froze them first, they won’t clump together and you can pull out a handful without having to thaw the whole bag.  Flash freeze leftover tomato paste in tablespoon sized portions.

You can also flash freeze pancakes, waffles and French toast, then bag them.

When I’m frying up eggplant or zucchini to make eggplant or zucchini Parmesan, I like to fry up extra and flash freeze the slices. Later, it’s pretty easy to thaw out or make some marinara sauce, pull out as many slices of zucchini or Parmesan as you want, and then make your dish. You don’t have to thaw them out first.

Air is the enemy in your freezer. The FoodSaver vacuum sealers(affiliate link on Amazon) sucks the air out so frozen foods last longer with higher quality.  If you are using regular freezer bags, squeeze as much air out as possible.

When Don’t You Need to Flash Freeze?

If things don’t stick together, you don’t need to bother flash freezing them. I always have a container of bread crumbs in my freezer. They don’t stick together so I can just pour out as much as I need.  If you’ve got a glut of tomatoes in the garden but don’t have the time or energy to cook them down, just toss them whole into a bag. You can cook them down later and use a food mill to separate the skins and seeds.

You can use ice-cube trays or baby food freezer containers like these (Amazon link) to freeze things like tomato sauce, cooked peppers–where you just want a small uniform portion to pull out later. I like to make up a batch of marinara sauce for pizza, and then freeze it in portions where each portion covers one pizza.

I also like to freeze lemon juice in ice-cube trays and then move them into a bag so it’s easy to pull out a bit anytime I need lemon juice. Sliced or chopped onions and peppers do stick together a bit so it’s easier if you flash freeze them, but if you’re in a hurry and throw them in a bag you can just whack the bag on your counter to loosen everything up and then pull out what you need.

Lemon zest and lime zest also stick together but I put extra in a bag and freeze flat without flash freezing. It’s easy just break off a piece when you need some and it thaws quickly.