Notice: Function add_theme_support( 'html5' ) was called incorrectly. You need to pass an array of types. Please see Debugging in WordPress for more information. (This message was added in version 3.6.1.) in /var/www/wp-includes/functions.php on line 5831
 Maybe the Best Pizza I've Ever Made | CheapCooking );

Home » Pizza » Maybe the Best Pizza I’ve Ever Made 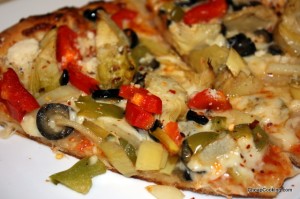 I’ve got two favorite pizza dough recipes: This pizza dough with honey from Jamie Oliver that makes a lot! (double my normal, 7-8 cups flour, good for large parties or freezing) and one from Lidia’s Italy with semolina flour, which I just realized I’d never posted. I will, soon.

The other night I used the one from Lidia and divided it in half. I was making a vegetarian pizza just based on what we had around so we ended up with:

I sliced all the vegetables up and tossed them together in a bowl, so the artichoke marinade could coat them all. I think that was key!

I pulled some pizza sauce from the freezer (almost my last!). It was very simple, perhaps based on this sauce.

Crust. Sauce. Shredded Mozzarella. Vegetables.  Baked at 500 on a well-heated pizza stone for about 10-15 minutes.

Delicious. I ate too much but it’s so much better fresh than reheated!