I’ve been having fun exploring a new cookbook from the library, Dining In by Alison Roman (Amazon link).  When I first glanced through it, I wasn’t sure. Some of the recipes just seemed like the whole focus was to combine unusual ingredients…but then I spotted this shrimp with butter and garlic and it looked easy enough and sounded good. Plus it was easy to scale down and I was just cooking for myself that night. She calls the recipe “Shrimp in the Shells with Lots of Garlic and Probably Too Much Butter.”  She likes long recipes names but I don’t think there is too much butter! She also calls for shrimp with heads still on so go for that if you want to… I opted for standard headless shell-on shrimp and last night I used tail-on shell-off shrimp, cooking them a little less.

So the first night I cooked it for just me, along with two of her other recipes that were easy to scale down and almost so easy as to not need to refer to the recipe the next time I made them: Roasted Broccolini with Lemon and Crispy Parmesan (made four times now!) and Crispy Smashed Potatoes with Fried Onions and Parsley (similar to crash hot potatoes but cooked in a skillet after boiling and topped with fried onions and parsley). Every single dish was simple but full of flavor.  And yes, you can eat the sliced lemons you roast with the broccolini.

I’ve never repeated recipes so quickly before. I made the same Shrimp with Butter and Garlic for my boyfriend a few nights later and added another: zucchini cooked in cream and topped with bread crumbs. Then I made the Shrimp with Butter and Garlic again when my daughter came for dinner.  No shrimp were left over any of these times and I’m usually known to cook too much! Last time I got smart and bought some good French bread to sop up the sauce. 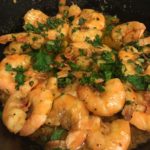 Shrimp with Butter and Garlic

These shrimp in butter and garlic from Alison Roman’s Dining In are delicious. Serve with good bread to mop up the sauce!

I’ve also made and enjoyed her Vinegared Romaine with Sour Cream, Bacon and Herbs and her Paprika-Rubbed Chicken with Lemon. And there are a bunch more recipes that I want to try: