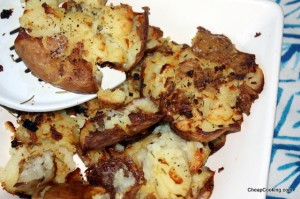 I’m not sure why these are called “crash hot potatoes” as they’re really more smashed.  I saw someone else reference them on their blog, but can’t remember who. Then when I Googled the name, it seems that Ree Drummond got them from an Australian Jill Dupleix.

I could have baked mine longer to get them crisper but the rest of the food was ready.They still got rave reviews.  Next time I might try adding some cheese but as we were having cauliflower cheese as well, I figured we were hitting the cheese limit for one meal.