For a quick meal, a nice stir fry can’t be beat, especially with bits from the garden.  I usually mix up something like this Beef and Broccoli Stir Fry but when I read the post on Northwest Edible Life about keeping a Mason jar of stir fry sauce in the fridge I had to try it.  While it’s convenient for me, I was also thinking about my eldest who’s off to college.

It was just me the other night so I whisked up the sauce. The only change I made was to use a little over a cup of oyster sauce because the bottle I had was 9 ounces and I didn’t want to leave that last ounce by its lonesome in a jar to get lost in the back of the fridge. 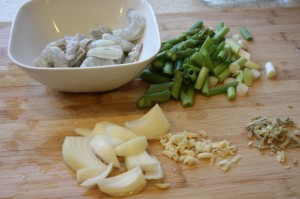 I cut up white onion, green onions, ginger (which I keep in the freezer), and asparagus while the frozen shrimp were thawing and the rice was cooking.

These days I almost always cook my rice in my rice cooker but for years I did it on the stove just fine.  If you need a primer, here’s a bit on how to cook rice on the stove. The rice cooker is easier. You don’t worry about the exact timing on the rice as it will keep it fresh on low heat for hours. And in the past I would sometimes get sidetracked bringing the water to boil and it would boil over. Ugh. 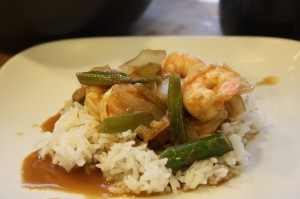 Start with the longest cooking thing if you’re mixing it up. In this case, I figured everything but the shrimp would take about the same time so heated some oil and tossed everything in, cooking until just tender. I added the shrimp and cooked just until pink and then added enough sauce to moisten and let it simmer another minute or two.  I like how flexible this is because I can use the same sauce if I’m cooking for one or more without having to adjust ratios in my head or end up with too much extra.

I entered Northwest Edible Life’s contest and actually WON one of the reCAP Mason jar lids with a spout, which I really wanted to try. It is perfect for something like this sauce. 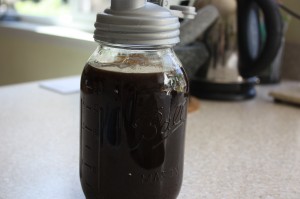 Use this simple, versatile sauce to toss over your vegetables towards the end of a stir-fry.

This makes 4 cups and keeps more or less indefinitely in the fridge. This is from NW Edible.
Previous Post: « Using Up Leftovers
Next Post: Baking Bread: My New Bread Machine »