Notice: Function add_theme_support( 'html5' ) was called incorrectly. You need to pass an array of types. Please see Debugging in WordPress for more information. (This message was added in version 3.6.1.) in /var/www/wp-includes/functions.php on line 5835
 Stovetop Macaroni and Cheese | CheapCooking.com );

Home » Pasta » Stovetop Macaroni and Cheese for One or Two

Stovetop Macaroni and Cheese is quick and easy to make. It’s also easy to stir in some ham, peas, asparagus or whatever you like to add to your mac and cheese. And you can cook it all in one saucepan. You just reduce heavy cream, then add the grated cheese to it and stir until melted.   I made some the other night and added some leftover ham from Easter and some fresh asparagus. The amounts roughly listed below made two good-sized portions for me, although next time I think I’ll add more asparagus.

Bring a saucepan of salted water to boil.  Chop a few stalks of asparagus into 1″ pieces and simmer a couple of minutes, until tender. ( Scoop out the asparagus and drain it. Throw a few handfuls (6 ounces or so) of your favorite pasta into the boiling water and cook until it’s done. In the meantime, chop your ham. Drain the pasta, saving a bit of the pasta water if you’d like, in case your sauce is too thick.  (There’s starch in the water from the pasta.)

Into the now empty pot, pour in some cream and heat until boiling, stirring. Cook a few minutes, until it’s reduced in volume by half, then take it off the heat and stir in a handful or two of grated Cheddar cheese, stirring until melted.

Stir in some chopped ham and asparagus. Taste and add salt if needed. If sauce seems too thick, stir in a bit of leftover pasta water until you get the consistency you like. 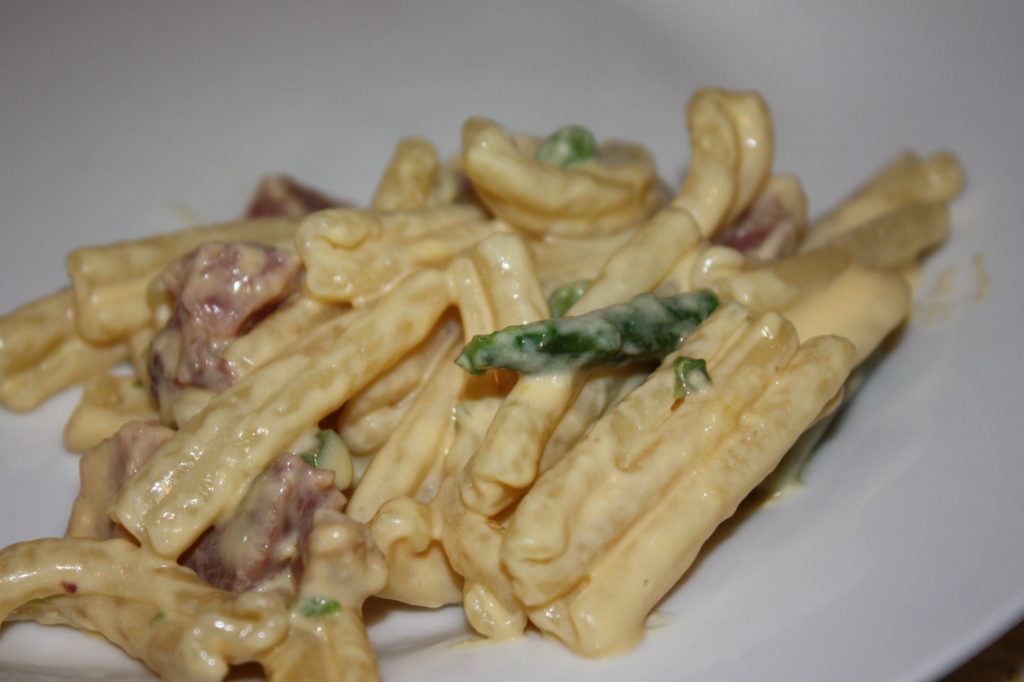 If you really miss the crispy topping, which is one of my favorite parts, you could pour this into a small baking dish, top with some breadcrumbs mixed with more grated cheese and a bit of oil and broil a few minutes. I didn’t feel like dirtying another pan and thought this was delicious just as it was. And all with only one pot!