Are you sick of zucchini yet? If you’re growing your own and perhaps in a foolish moment planted more than one like I did, you may well be! Having a variety is fun and they combine well in this Tex-Mex Squash Casserole but if you only have one kind, I’m sure it will taste equally good.

In addition to the fried zucchini I wrote up earlier, I’ve also grilled a ton, sliced into thick chunks along with onions and peppers. That’s a default vegetable side dish for me all summer.

I made bread and butter zucchini pickles that my boyfriend can eat a half a jar of at almost every meal.

Then I used Eat Your Books to search through my cookbooks for more ideas. I found this Tex-Mex Squash Casserole in The Homesick Texan Cookbook.  It’s hard to take a pretty picture of almost any casserole but trust me and make this!

With tortilla chips and jalepenos giving it a Tex-Mex flavor, this casserole is not going to win any low-calorie contests but it will win some high flavor ones!

I mostly halved the recipe but used some extra zucchini. This filled a 9×9 pan, which is what I wanted. I’m noting her suggested amounts (halved) because I didn’t measure. I just kept slicing until it looked like it would fill my dish. 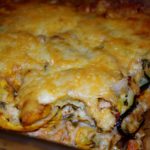 I’ve really been enjoying this cookbook. One of the first recipes I made was a jalapeno relish, which had a nice kick to it. Other dishes I’ve enjoyed so far include chicken-fried steak with cream gravy, Houston-style green salsa, chorizo empanadas, jalapeno pinto beans, Austin-style black beans, tacos al carbon, Dr. Pepper ribs, carnitas, Mexican corn, cucumber salad and Houston-style flour tortillas. I’m getting hungry again just typing that list out and saw several more recipes I want to try as I was leafing through the book.