Home » Learn About ... » Food Storage » When Menu Plans Change, Save the Produce! 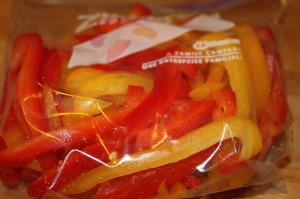 It happens to all of us. You make a menu plan, you do the shopping, and then something happens.  I had a recipe I wanted to try that called for a red and yellow pepper but then I didn’t get to it. No way was I going to waste those peppers so I washed them, seeded and sliced them, and tossed them in a freezer bag.  If I’d had more time, I would have flash frozen them so it would have been easier to grab just a few later. But as it is, I can probably whack the bag on the counter to separate them and pull out just what I need later.

They won’t be good for eating raw after freezing but they’re great for cooking.  Some recipe I like that use cooked peppers include: