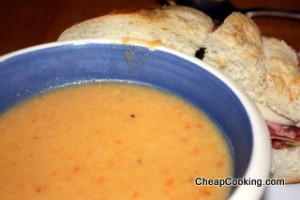 I used turkey broth I had in the freezer instead of chicken broth but otherwise stuck to the recipe except I didn’t top the soup with bacon as suggested because our sandwiches had cold cuts and that seemed like enough meat. Mine came out much more orange than his. Leftovers were great for lunch today with a small salad.