I’ve always been taken with the idea of cooking my way through an entire cookbook, long before Julie and Julia.   Reading Jamie Oliver’s newsletter I saw that this woman Amy had cooked her way through his Revolution cookbook, which I love.  I have talked about having some sort of cooking party to do his “teach someone” bit, but have yet to organize it. (Although hopefully I do my part through this blog!)  But she inspired me to pull out his book again. I had just bought some frozen salmon filets at Costco and am trying to eat fish once a week. (We’ll be lucky if I make it once a month based on past tries! I don’t actually really  like fish, although my girls both love it.)

So I saw her mention the salmon tikka in the Revolution book and decided to make that tonight, so set the plastic wrapped frozen filets to thawing in a bowl of cold water while I started some rice in the rice cooker. 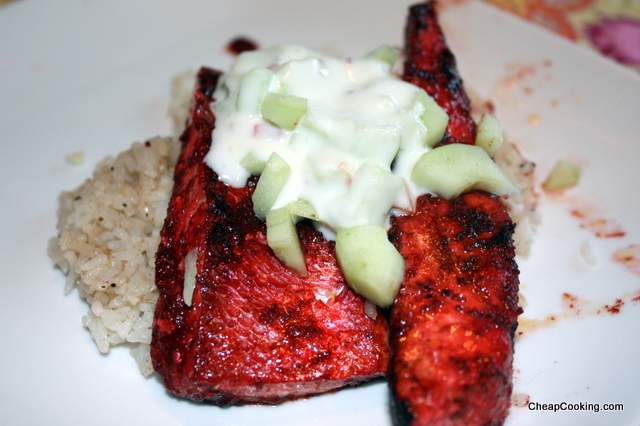 I had no cilantro. I’ve been trying and trying to grow some and finally have some started but it’s just wisps. Rather than make a special trip to the store I just left it out. But we all love cilantro and I’m sure this would be even better WITH some–but it gets a top rating even without.  Most people would probably have cilantro in their fridge and not have a jar of Patak’s tandoori paste in the pantry, but I did have the tandoori paste at least!

After I started the rice and while I was prepping everything, I decided to go ahead and try one of his rice variations too. I had everything I needed for the garlic and nutmeg rice so went with that one.  I did actually have a fresh nutmeg that I grated some of for this.   When I ordered some spices from Penzeys, they used nutmegs and cinnamon sticks as part of the packing material. Love that!

So first the rice…

Note: I wasn’t sure my teenage daughter would like this, although I suspected I would.  I didn’t say anything about it but she took one bite and said “What is in this rice? This is delicious!”

So my kids love fish and my youngest loves Indian food so I figured this was an easy win for dinner and I was right!  Plus, it was totally easy.  I did not have cilantro on hand but it would be even better with some I am sure.  The cucumber was from my garden, as was the red chile! The salmon was from Costco, wild frozen.  We have several Indian grocery stores nearby now (yay!) and I had picked up a variety of Patak’s pastes at some point and used the Tandoori paste here. 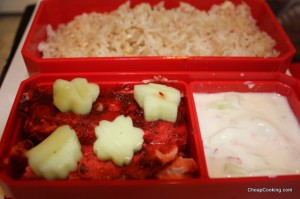 This says it serves 2 but true to form I would call it 3 servings for us, which was perfect as my daughter wants to take some for lunch tomorrow. We packed it in a bento for old times’ sake. (Did bento lunches a large part of her sophomore year).

I liked this and I am trying to eat more fish.  My daughter LOVED this. We both loved the rice.