Notice: Function add_theme_support( 'html5' ) was called incorrectly. You need to pass an array of types. Please see Debugging in WordPress for more information. (This message was added in version 3.6.1.) in /var/www/wp-includes/functions.php on line 5835
 Jamie Oliver's Jerk Chicken | CheapCooking );

I had bought some bone-in chicken thighs without a clear plan on how to cook them. I talked to my daughter as she walked home from BART last night. We often talk about our dinner plans and share recipes. She was going to make either shrimp tacos or steak tacos. I mentioned the chicken thighs and she suggested Jamie Oliver’s Jerk Chicken, which she has made many times. I’ve made it at least once before and really liked it. I had it in my head that the chicken needed marinating but it does not so this is a great fast and flavorful way to cook chicken.

In fact, the recipe comes from Oliver’s Meals in Minutes. This book has 50 full meal plans, often with dessert, that he says you can fix in 30 minutes. I don’t think you’d get this done in 30 minutes the first time you make it but once you know what you’re doing, you probably could. The book has step by step directions covering what order to fix and cook things, multi-tasking all the way. Start the kettle so you’ll have boiling water when you need it, turn this pan on, put the chicken on the grill pan, go make the salad, turn the chicken, etc. It’s a whirlwind while you’re cooking if you’re going for the speed but the food is good!

Everything is served family style, on large platters or in large bowls. Salad is often chopped and dressed on a board and served that way too. It’s cute but I think I’d opt for using a salad bowl and deal with the extra dish.

Jamie Oliver’s jerk chicken menu includes black beans and rice, corn on the cob, and a really good chopped salad with lime juice. I cut the recipes for the chicken and rice in half yesterday (but used a whole can of beans), made just enough salad for me and cooked just one ear of corn. I just didn’t want that many leftovers!

One thing to keep in mind if you cut the chicken recipe in half is that you’ll want to use a smaller baking dish. I didn’t think about that last night and just put the chicken on a small sheet pan lined with foil. The lovely jerk sauce pretty much cooked away because it was spread too thin.

I used chicken thighs last night and cooked them a bit longer than the chicken breasts Oliver called for. 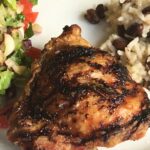 The other dishes are all prepared once the chicken is in the oven so you can pick and choose what you’d like to add for side dishes, or make your own favorites. If you have a fresh lime, the salad is really good!

Add Corn on the Cob to Jamie Oliver’s Jerk Chicken

Start a large pot of water boiling when you start the oven. Cook some shucked fresh corn on the cob in boiling water while you’re making the jerk sauce. Once the chicken goes in the oven, wipe the grill pan off and char the corn on it.

His rice and black beans is good as well and is also started once the chicken goes in the oven. Use 1 1/2 cups rice, 1 can of drained and rinsed black beans, a cinnamon stick, 2 green onions and 2 1/2 cups chicken broth. When the chicken goes into the oven, cook the scallions in a bit of olive oil along with the cinnamon stick and a big pinch each of salt and pepper. Let the green onions soften a bit, then add the rice, chicken broth and black beans. Bring to a low simmer, cover and cook until the rice is done, about 15 minutes.

A finally, a good chopped salad with a squeeze of fresh lime juice adds to the Caribbean menu. Chop up some romaine lettuce, endive or radicchio if you have some, a red bell pepper, half a red onion and some cilantro. Toss this with olive oil, fresh lime juice, salt and pepper. Add some alfalfa sprouts if you’d like.